Audi’s Robotic Car Drives Better Than You Do 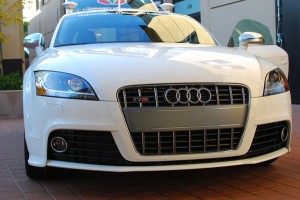 The robocar Shelley is a 2010 TTS and can run without a human behind the wheels or inside the car. The team chose it because it features a fly-by-wire throttle, adaptive cruise control, a semiautomatic DSG gearbox and other gadgetry. That made it relatively easy to make the car fully autonomous using electronics developed at the Electronics Research Lab.

The car is named Shelley in honor of Michèle Mouton, an Audi rally driver and the first woman to win at Pikes Peak. Shelley uses differential GPS to track its location to within 2 centimeters, though Gerdes says the margin will be closer to 1 meter on the mountain. Wheel-speed sensors and an accelerometer measure its velocity and a gyroscope controls equilibrium and direction. The algorithms that make it all work run on hardware developed by Sun Microsystems.

“The components we added that actually interface with the car would fit in a shoebox,” said Marcial Hernandez, a senior research engineer at the Electronics Research Lab. “The largest component by far is the gyroscope, and it’s an 8-inch cube.”