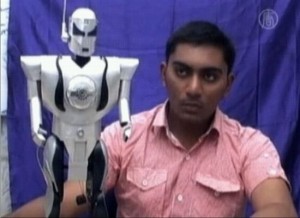 The earthquake detecting robot performs a useful purpose and looks fierce while doing so.

The devastating earthquake that struck his native State, and the recent earthquake in Haiti prompted Hiren Patel and a group of student from J T Engineering College in Gujarat, India, to develop a robot that senses an earthquake.

It may be surprising to believe, the earthquake detecting robot is connected wirelessly to sensors embedded in the ground and can somehow detect impeding earthquakes about 3 hours before they actually hit,thus warning the authorities against the danger well in advance.

Dubbed as the Earthquake Detector Robot, it is made of a single receiver and two transmitters whose circuits are kept inside the earth to sense changes in temperature and water levels and transmit the information about the changes via microwave frequencies.

When it gets a signal of impending doom, it’ll send out warnings over the internet.

The robot employs microcontrollers to sense vibrations and give off an alarm on detection. Though, three hours may not seem time enough to make significant arrangements to avoid destruction, if the earthquake detecting robot really works as claimed, many lives could be saved for sure.