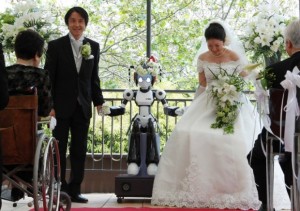 In May, a couple in Japan was wed by a robot priest named "i-Fairy".

i-Fairy was first seen at the CES 2010 in Las Vegas early this year. According to the company's representative, the robot can be “programmed with the user’s voice and accompanying body gestures that give the I-FAIRY a more natural feel when used for museum guide work”.

Their love story began when Tomohiro Shibata saw the i-Fairy and bought the 4-foot robot from Satoko Inoue's company, Kokoro Ltd, who created the i-Fairy machines. With the two sharing the same interest and love for robots, got married and had their own i-Fairy to officiate their most celebrated and media-covered wedding of the year.

The I-Fairy was remotely controlled by one of the couple's friends at the 50-guest wedding. It talks, and has 18 joints in its arms.