MABEL: A Bipedal Robot Walks Naturally With no Camera 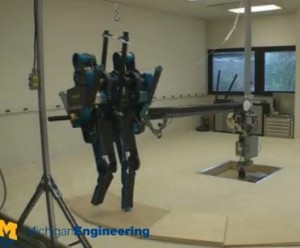 Mabel, a bipedal robot is unlike any other walking robots, ASIMO and QRIO mainly because it can walk on uneven terrain more efficiently.

We know that ASIMO and QRIO are built with flexible and strong material and motors to walk and run. However, what makes MABEL different from these two other bipedal robots is that it uses motors for the "knee joints" connected via springs. Such that, when the robot hits an uneven ground, its knees flex or simply jumps with the springs.

Similarly, MABEL's torso is made up of cables and pulleys connected via springs. The spring works like an animal's leg tendon. According to the researchers, lead by Jessy W. Grizzle of the Professor in the Control Systems Laboratory of the Electrical Engineering and Computer Science Department within the College of Engineering at The University of Michigan in Ann Arbor, Michigan, MABEL has "roughly the morphology of a human with the compliance (spring-like character) of the Raibert hopper" which makes the robot run smoothly like a human. (Watch the video below)

In addition to its physical features, MABEL does not rely on cameras to detect or determine the surface of the ground, instead it uses a dynamic "natural gait" that’s able to flex on uneven surfaces as she walks or runs on them.

In the coming months or so, MABEL's complete blueprint will be available on the web for students to use as a science platform for the further discovery of more sophisticated feedback control mechanisms for advanced dynamic movement stabilization.