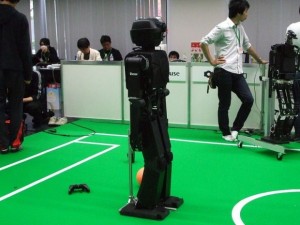 Robocup 2010 willl be held in Singapore in June.

But pre-qualification finals are on-going everywhere early on this year to screen hundreds of robot participants. In the latest “RoboCup Japan Open 2010″, we saw several enthusiastic robot owners all wanting to win a place for the finals.

One of of the event, the biggest robot soccer tournament in the world was participated by 225 teams from all over the world. Among them, played the soccer playing humanoid which competed in the adult size class (robots that stand between 130 and 160cm tall).

This robot was jointly developed by Professor Asada’s lab at Osaka University and the Osaka Institute of Technology. It has 22 joints and uses a servo motor (placed in its torque: 327kg/cm).

However, gauging from the video itself, you'll see that the developers have a lot more things to do in order for them to take a piece of the cup in the finals.

Here is a videos, courtesy of Crunchgear.