The MIT’s Program ‘Beerbots’ Will Be Shut Down 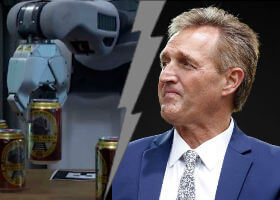 Senator Flake of Arizona caused quite a stir when he introduced an amendment as to the US Department of Defense Appropriations Bill. In his statement, he argued that no funding should be made available as to the research of beerbots as well as any other robot bartenders. However, this amendment stems from a misunderstanding as to the use of robots. Where senator Flake saw the demonstration by MIT as a way to dispense beer using robots, the research was in line as to how multi-robot planning could take place in situations of uncertainty.

Another thing about his statement is that he did not let on as to the primary objective behind the research which was to solve logistic challenges in the real world, something of which we are in dire need. As opposed to seeing this, the senator saw that MIT was using government funding as a means of developing robot bartenders, which could not be further from the truth. His amendment is in place to prevent something that was not in existence from happening, which has amused people. People are of the opinion that his stand is a way to take on wasteful spending without looking into facts and counting on the public not to push back, owing to misinformation.