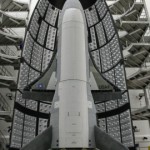 Originally a NASA's project, the X37B Space Plane has made its first launch on the runway of the U.S. Air Force, as an unmanned robotic orbital test vehicle.

We first heard the news about this old spacecraft way back in October 2009. And after many years of engineering works, X-37B space plane has finally sky-rocketed last April 23 aboard the Atlas V rocket, 4 days late than scheduled.

The 29-foot-long, 15-foot-wide and 11,000 pounds Orbital Test Vehicle is set to perform several tasks as part of its initial mission. The Air Force will measure the guidance, navigation, thermal protection, and unmanned operations of the X-37B in orbit, re-entry, and landing.

The robotic space plane will work similar to other satellites in space, with operators on Earth controlling its paths. After completing certain tests withiin the targeted number of days (270) in space, the Air Force will then command the space plane to return home.

"Upon being given the command to return to Earth, the X-37B will automatically descend through the atmosphere and land on the designated runway. There is no one on the ground with a joystick flying it," said Lt. Col. Troy Giese, the X-37B systems program director, in a statement.